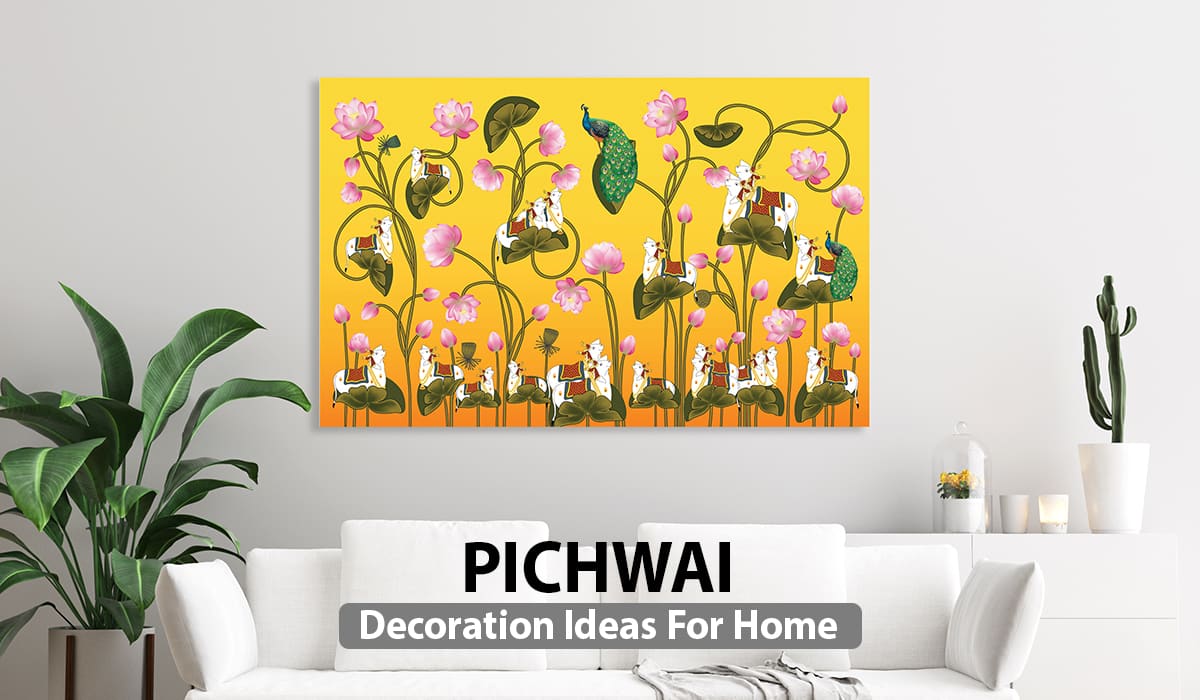 India is home to a rich art tradition, and there are many schools and forms of art. The Pichwai art is unique and always in demand. Do you know what is pichwai painting?

Today, let us learn about this beautiful style of painting. Pichwai painting Designs always add a touch of serene elegance to any room- So if you want to bring some positive energy into your home, try some Pichwai art from Wall Curry. 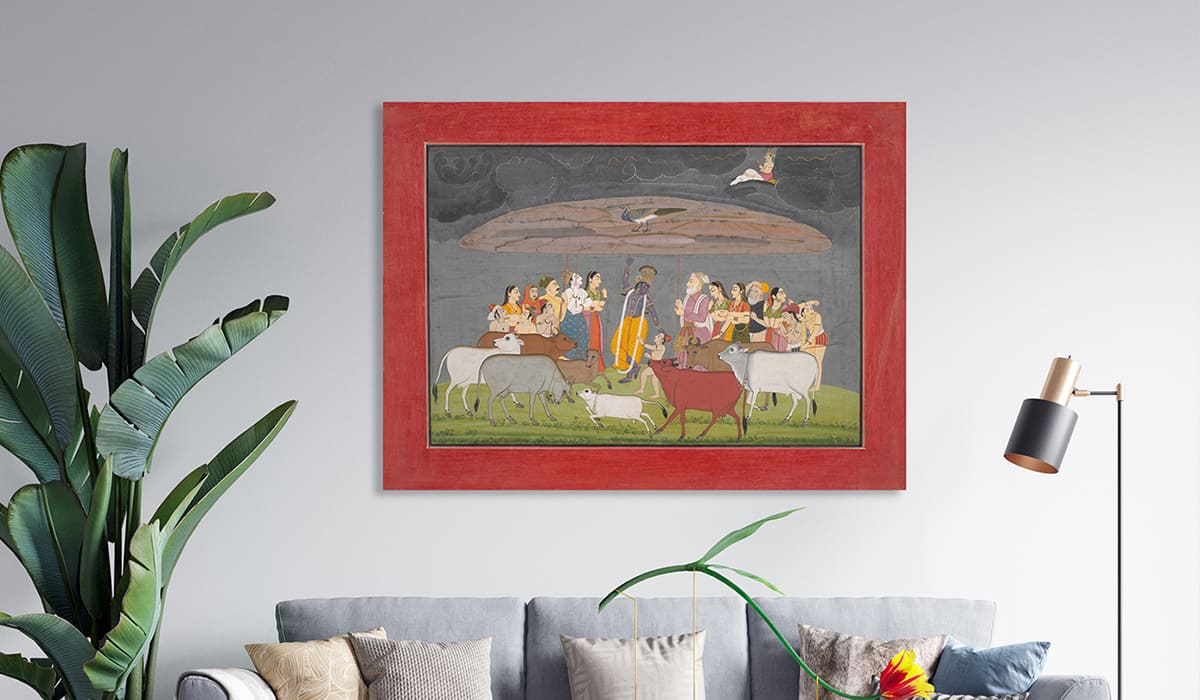 The Pichwai painting art was popular among the ancient Indians and afterward the Mughals. It was reintroduced in the 16th century and is now practiced in India and worldwide.

The word Pichhwai originates from the Sanskrit words “pichh,” which defines the “back,” and “wais” describes the “hanging.” Most Pichwai paintings depict the life story of Shrinathji, the form of Lord Krishna holding the Govardhan hill.

The majority of the Pichwai Paintings depict Lord Krishna’s boyhood adventures, with elements like Gopikas, cows, and calves, and show Lord Krishna playing the flute. The murals are painted on cloth, with the focal point being Lord Krishna.

Contemporary and easy pichwai painting have rich artistic heritage and value. They are often found hanging in art galleries. Also on the walls of the homes of art enthusiasts who respect traditional Indian handicrafts.

What is Pichwai Painting? Pichwai is also known as the Pichwai, one of the most spectacular and ancient forms of Indian art. Pichwai paintings have their origins in the Rajasthani town of Nathdwara near Udaipur.

The exquisite 400-year-old art form depicts Lord Krishna’s glorious life. The narrative of Shrinathji, the incarnation of Lord Krishna clutching the hill Govardhan, is shown in them. Lord Krishna raised the mountain named Govardhan on his little pinky finger.

The people of Vrindavan took refuge beneath the mountain when Lord Indra demonstrated his authority over the inhabitants of Vrindavan with constant rains and thunderstorms. Indra’s ego was shattered when he discovered he had failed to disrupt their lives. Since then, people have been worshiping Govardhan hill and performing the Govardhan Pooja.

The Holy City of Nathdwara and the Pichwai painting history

Nathdwara city is one of the famous cities known for the temple of Krishna. It’s a city in the western state of Rajasthan, India. Nathdwara is located on the Aravalli Hills. On the banks of the Banas River, in Rajsamand District- 48 kilometers north-east of Udaipur. It has a significant Vaishnavite shrine for the Pushti marg sect.

To protect Lord Krishna’s idol from Mughal ruler Aurangzeb, the devotees transported it from Vrindavan to the village of Sinhad. When it reached the Sinhad, the bullock cartwheels sank deep in mud. And the pilot could not move it further.

The priests knew it was the Lord’s choice of location. As a result, a temple was constructed there during the reign of Maharana Raj Singh of Mewar.

What are the Materials used for Pichwai Painting Today?

An old Pichwai painting takes a long time to complete, from a few weeks to many months. Painters first draw this traditional art on hand-spun starched cloth and then paint and print the image in dazzling colors or weave it with hand blocks.

Traditional Indian pichwai painting used natural colors and even natural brushes. The foundation is primarily red, with yellow or another brightly colored embroidery. The emphasis is on employing vivid and vibrant colors like red, yellow, green, and black. And then a border embellished with gold, dabka work, or Swarovski crystals in modern iterations.

The beginner easy pichwai painting technique involves applying the pigments after heavily starching the fabric. It is usually a thick woven cotton cloth. Then, painters use binders and adhesives to apply the colors on the exterior. These paintings were traditionally delineated on a black or white surface.

The pigments are derived from plant and mineral materials. Such as indigo, copper acetate, mercury sulfide, lapis lazuli, and lamp black. The painting brushes were of goat hair and squirrel hairs for more delicate lines.

What Are Different types of Pichwai Paintings?

Here are some popular forms of Pichwai paintings:

1. What is Lotus pichwai painting Pichwai lotus painting depicts the Lord in different Leelas with the moon, lotus blooms, peacocks, parrots, or cows. The scenery is of the lush vegetation the original artists saw aplenty in their surroundings. The lotus flower and the pichwai painting are synonyms for each other. Paintings in this vein are also known as the Shrinathji Pichwai Art. Because the Lotus is the favorite flower of Srinathji.

Lord Krishna loved the lotus flower as Srinathji. Many paintings depict Lord Krishna as holding one lotus in his right hand and wearing a Garland of lotuses. Also, lotus flowers often decorate his bed. Cows are an essential part of Hindu mythology. And also play a significant role in the story of Krishna. Therefore, they form an integral part of many Pichwai Paintings, i.e., pichwai painting cows. 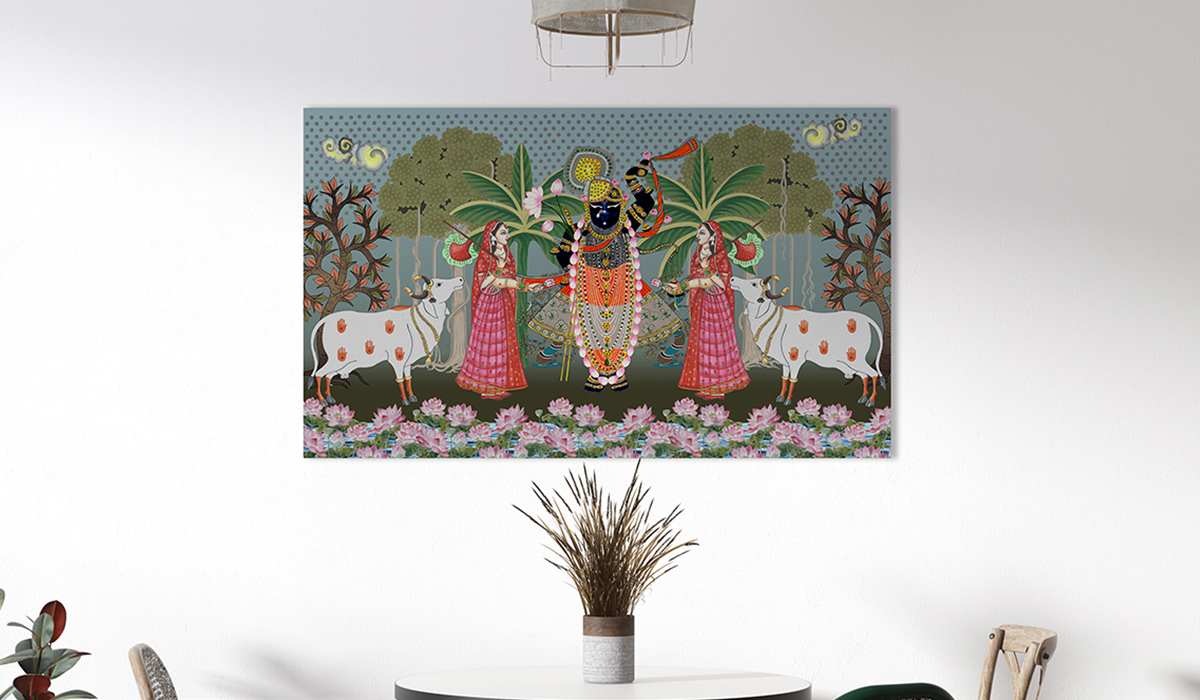 Among the different types of Pichwai arts, a significant theme is the celebration of the autumn festival of Sharad Purnima. The swing ceremony of Radha and Krishna on the night of the full moon.

The tree of life is a significant and wide spread theme or archetype in many of the world’s mythologies, religious, traditional, and philosophical traditions. Therefore, it is closely related to the concept of the sacred tree. Peacock pichwai paintings usually show Shrinath Ji is in the center, wearing rich clothes with a peacock feather on his crown. They show Shrinath Ji in a cradle depicting the Janmasthami festival, with celebrations unfolding around him and people eagerly awaiting a look. 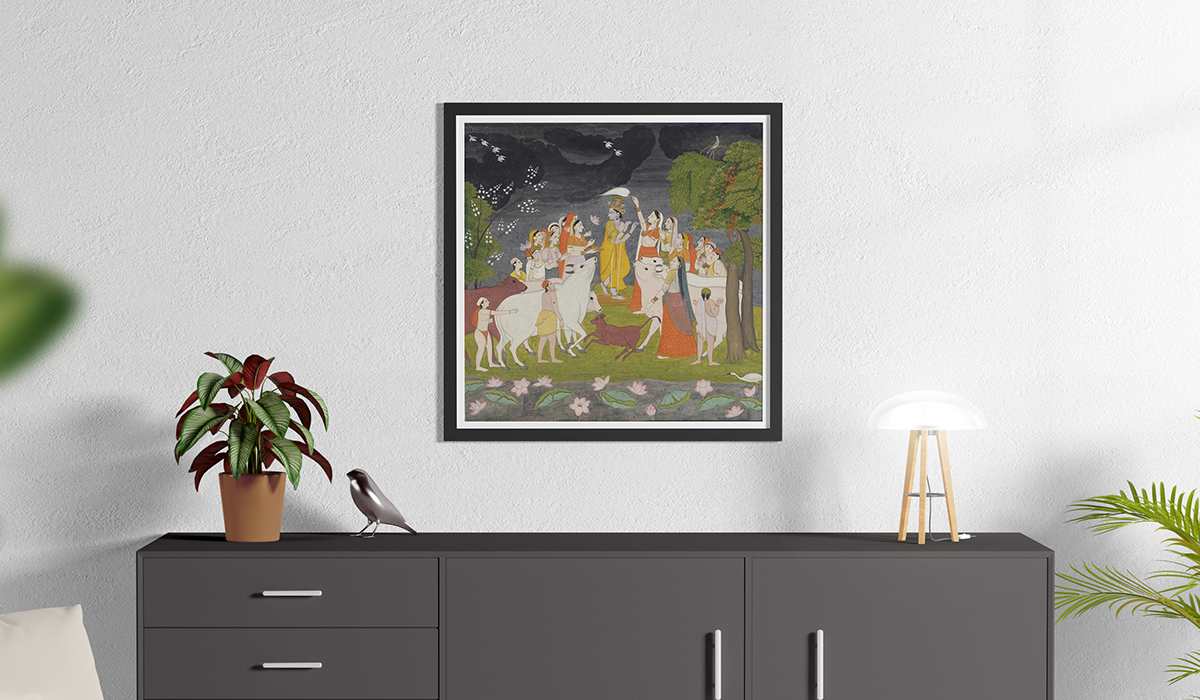 The Sandhya aarti pichwai is an ancient composition depicting Yashoda and the gopis greeting Krishna, Balarama, and their gopa friends as they return home from grazing with their herd.

7. What is pichwai painting of Radha Krishna Rasaleela is the most famous representation of Radha and Krishna’s love story. It depicts Krishna playing his flute and Radha listening to him. In these paintings you can also see the Gopis dancing around them. You can order Radha Krishna painting on canvas from Wall Curry.

What is Pichwai Painting in the worship of Lord Krishna’s Significance?

The devotees belonging to the Pushti Marg observe 24 essential darshans and festivals. At the time of formal viewing, the offering includes the sumptuous food defined as bhoga and divine adornment, shringara. Here pichwais play a significant role as part of a matched set of textile coverings, including wall coverings, ceiling canopies, and coverings for the throne, steps, and other platforms. Annakoot implies the Govardhan Pooja. It depicts Krishna with his left arm raised above his head, depicting how he lifted the mountain. Worshippers place their offerings in front of the statue, signifying the offerings Krishna requested the locals make to Mount Govardhan rather than Indra.

Indra, who had no idea who Krishna was, became enraged and punished the villagers with torrential rain and storm. Krishna then raised the entire mountain with his left hand, demonstrating his divinity. It is the festival in autumn and marks the coming of age for Sri Krishna on earth. Painting pichwai art often depict this occasion with many cows ornamented with handprints, peacocks, plumes, and bells. 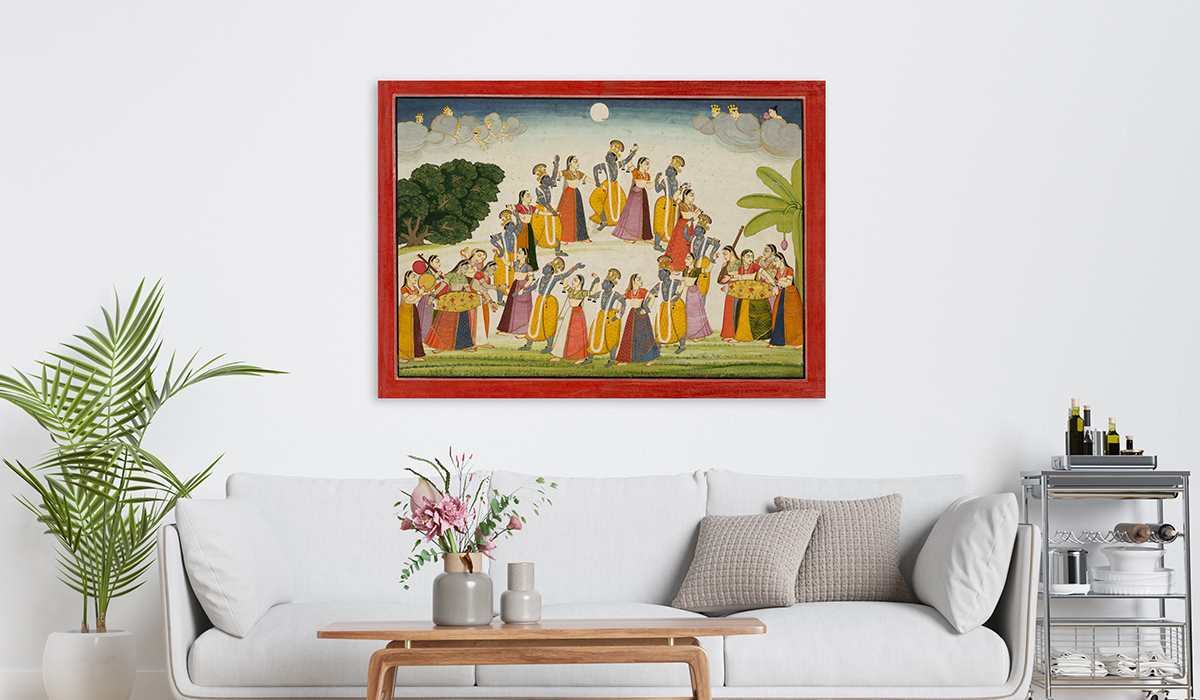 In the Pichwai art form of Rass Lila, adolescent Krishna dances with his maidens known as Gopis in the Vraj forests on a full moon night. Krishna takes several forms to give his attention to each of the Gopis, the paintings depict.

As drawn in paintings, Krishna demanded milk and butter from the gopis to safely go home. Hence the Daan Lila depicts the gopis sharing their milk with Krishna.

The most common pichwai Krishna painting has huge eyes, a pointed nose, and a substantial physique. This fabric painting needs a starched cloth that takes 2-3 days to prepare and nearly a week to complete.

To learn pichwai painting takes plenty of time. Pichwai painting is famous among people from Uttar Pradesh and Rajasthan. Devotees and art connoisseurs like seeing these hanging inside temples, purchasing them, and displaying them on their walls.

The Pichwai art is an integral part of Indian culture and especially significant for Hinduism, and the pichwai painting of Rajasthan has a tremendous demand overall in the world.

Pichwai paintings can truly transform your room. Not only do they bring some serene, divine energy to your home- but they also add a distinctly ethnic touch to it. Buy Pichwai Paintings from Wall Curry collection of wallpapers and wall art if you are looking for some Pichwai paintings online or some other styles of Lord Radha Krishna paintings.

What is Pichwai Painting’s Significance?

Pichwai paintings are an integral part of Indian culture. For the Viashnavite sect Pushtamarg, they hold a special significance. These textile paintings show festivals like Diwali, Janmashtami, Holi, Sharad Purnima, Raas Leela, and Anakoot. Pichwai art is about the Srinathji form of Lord Krishna, and often depict him with his favorite things in the beautiful paintings. Pichwai paintings remain in tremendous demand among both devotees and art enthusiasts worldwide.

How to make a pichwai painting?

Beginner easy Pichwai painting contains a series of paintings on cloth using natural colors and vegetable dyes. Artists use a natural brush made from animal hair and cotton threads. It is a time-consuming process that often lasts for weeks- and the artists have to pay much attention to detail.

The artists stretch a stiffly-starched cotton cloth on a frame, and then apply the paint to it. In modern Pichwai paintings, artists often use block painting methods and apply adhesive colors and crystals.

How do the Pichwai Paintings portray Srinathji differently?

Pichwai paintings depict the life of Lord Krishna and his festivals such as Janmashtami, Sharad Purnima, Raas Leela, and Diwali, among others.

The defining characteristic of Pichwai art is the distinct style for portraying human figures. They have pointed noses, big eyes, and a substantial physique. Lord Krishna occupies the center in most paintings, while the other motifs radiate around him.

What amount of time will you need to draw Pichwai Paintings?

The amount of time spent making Pichwai paintings gives us an idea about how hard this work is. To make the painting, it takes a few days to several months. A well-experienced person can complete the art within one week.

The stiffly starched cloth the artists paint usually takes two to three days to prepare. The preparation of mineral and vegetable dyes is also a time-consuming process. Then, painting and drying can take several weeks.

What is Pichwai Painting Made Of?

Pichwai was originally painted on cotton fabric that was starched by hand, then sketched on by the artisans, the results were beautiful and elaborate decorative images which then were ready for painting with organic colors, painted with natural brushes and painted with organic paint. 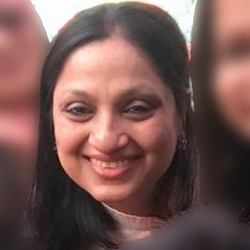