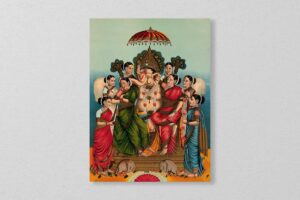 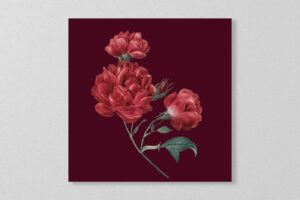 Other people want this. People are adding this to their basket right now!

Ganesha Basohli miniature circa 1730
Ganesha getting ready to throw his lotus. Basohli miniature. Source: This work is reproduced and described in Martin-Dubost, Paul (1997). Gaņeśa: The Enchanter of the Three Worlds. Mumbai: Project for Indian Cultural Studies. ISBN 81-900184-3-4, p. 73, which says: “Attired in an orange dhoti, his body is enitirely red. On the three points of his tiny crown, budding lotuses have been fixed. Gaṇeśa holds in his two right hands the rosary and a cup filled with three modakas (a fourth substituted by the curving trunk is just about to be tasted). In his two left hands, Gaṇeśa holds a large lotus above and an axe below, with its handle leaning against his shoulder. In the Mudgalapurāṇa (VII, 70), in order to kill the demon of egotism (Mamāsura) who had attacked him, Gaṇeśa Vighnarāja throws his lotus at him. Unable to bear the fragrance of the divine flower, the demon surrenders to Gaṇeśa.”
Source: National Museum , New Delhi
Ganesha is the elephant-headed Hindu God of prosperity and wisdom. He is worshiped widely and is considered the Lord for auspicious beginnings, a remover of obstacles, imparter of success, prosperity, and intellect.
Channelize some positive energy into your home and make room for a Lord Ganesha painting!

There are no reviews yet.